Aquatic turtles are referred to as turtles, terrapins, or chelonians. For the purpose of this discussion, the common and popular red- 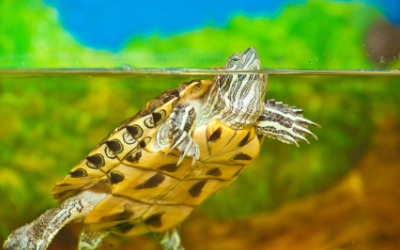 eared slider will be used.

The red-eared slider (Trachemys scripta elegans) is probably the most popular pet aquatic turtle. These turtles are semi-aquatic turtles (they like to leave the water to bask in the sun) native to the warmer southern United States. They are found in calm, quiet, warm, fresh-water ponds, lakes, creeks, and streams, where they have access to large flat rocks or logs on which they sit to bask for hours in the sun. They are excellent swimmers and shy away from predators and humans by quickly sliding back into the water (hence the name red-eared slider). In captivity, they recognize their human caretakers and will come to the top of the water or side of the  tank inquisitively to greet them. Wild red-eared sliders often bask in groups but are fine living on their own as pets. If you keep more than one in the same tank, they should have plenty of swimming room and should be of similar size to avoid bullying. Monitor them for fighting or injuries.

"Wild red-eared sliders often bask in groups but are fine living on their own as pets."

In the wild, turtles hibernate at the bottom of ponds and shallow lakes in the cool winter months in response to changes in temperature and day length. In captivity, however, the goal is to keep the tank temperature and light cycle constant, so that pet turtles do not go into hibernation; the metabolic changes that turtles’ bodies undergo during hibernation suppress their immune system function, making them more susceptible to infection. Therefore, it is best to keep pet turtles out of hibernation if possible.

Red-eared sliders are omnivores, eating both animal protein and vegetable matter. They can be fed a combination of commercially available turtle pellets, small fish, and a variety of vegetables. They should also receive supplemental calcium and a multivitamin. See handout "Feeding Aquatic Turtles" for more information or speak to your veterinarian for specific nutrition recommendations for your turtle.

Red-eared sliders can make great pets if cared for properly. Unfortunately, they sometimes do poorly in captivity because many people simply do not know how to take care of them properly. As with any pet, reptile or otherwise, be sure to research as much as possible about the animal before you bring it home.

Due to concerns regarding turtles carrying Salmonella bacteria (see handout "Common Problems in Aquatic Turtles" handout) and children potentially putting small turtles in their mouths, it is illegal in every state in the United States to sell turtles under 4 inches (10 cm) long. Check your local laws regarding turtle ownership. Salmonella is a bacterium often implicated in severe gastrointestinal tract infection in humans. While this bacterium may cause only mild vomiting and diarrhea in healthy adults, in young children, the elderly, and people with suppressed immune system function, it can cause fatal disease. All reptiles, not just turtles, can potentially carry Salmonella in their gastrointestinal tracts and shed it in their feces. Since red-eared sliders are a common family pet, children may be handling them often and may be exposed to potential infection. Most turtles carry this bacteria asymptomatically, meaning they do not get sick from it. They can, however, spread it easily to a young child if that child holds the turtle and then puts his soiled hands or the turtle, itself, in his mouth. Common sense and good hygiene are essential in preventing this disease. After handling any pet, its excrement, its bedding, or its toys, thoroughly wash your hands.

How do turtles differ anatomically from other animals?

The most obvious difference between turtles and other animals is that turtles have protective shells that replace many of the bones, such as the ribs, that other animals have. The top, or dorsal shell is called the carapace, and the bottom, or ventral shell is called the plastron. The shell is covered with bony plates called scutes. The scutes are usually shed in large patches, unlike the scales in snakes, which usually are shed in the snake’s skin all in one piece. The numbers of scutes, or the "rings" on the scutes, have nothing to do with the turtle's age.

"The most obvious difference between turtles and other animals is that turtles have protective shells that replace many of the bones, such as the ribs, that other animals have."

In general, males have a more concave plastron than females. This concavity allows for easier mounting of the male on the female for mating. Males are also smaller than females; having a male and female next to each other makes the comparison easier. Adult males average 7-9 inches in shell length (18-23 cm), while adult females average between 10-12 inches (25-31 cm). Males also usually have longer and thicker tails, which once again facilitates easier maneuvering during mating. Adult males have long front toenails.Finally, the distance between the vent (common opening on the underside of the tail for emptying of the digestive, urinary, and reproductive tracts) and the back edge of the shell is greater in males.

The pectoral or chest muscles are well developed in turtles for swimming. Turtles also have strong leg and neck muscles that enable them to retract their limbs and head into their shells when they are disturbed or stressed. This retraction process is one of the signs of a healthy turtle that you should observe if you are considering purchasing or adopting one. In addition, turtles lack teeth but have a strong beak that they use in biting.

Unlike mammals, turtles have no diaphragm muscle separating their chest and abdominal cavities; they draw air into and out of their lungs, or breathe, by movements of membranes enclosing their internal organs and by movements of their legs and head. Also, unlike mammals (including cats, dogs, and people) that have a four-chambered heart, turtles have a three-chambered heart.

Another difference between mammals and turtles is that turtles have a renal portal blood system, meaning they have a special set of blood vessels that takes blood from the hind limbs and filters it through the kidneys before returning the blood back into the general circulation. This means that toxins from the rear limbs (as could occur from bacteria in wounds on the legs), as well as drugs injected into the rear legs, would be filtered out by the kidneys and would not enter the general circulation. This is significant when antibiotic or other injections are administered to turtles. Injections should be given only in the front legs and not the back legs, or they may be removed from the bloodstream by this renal portal circulation before reaching key organs in the body.

Although they are reptiles, aquatic turtles excrete the majority of their nitrogenous wastes (the breakdown products of protein digestion) as urea or ammonia, and only excrete a small amount of solid urine referred to as uric acid. In contrast, terrestrial or land turtles are more like other reptiles that try to conserve water by excreting uric acid as the main waste byproduct of protein metabolism, thereby allowing them to adapt to desert environments where water supply might be restricted.

Finally, unlike mammals, turtles have a cloaca, which is the common space inside the hind end of the turtle’s body into which the urinary, gastrointestinal, and reproductive systems all empty. Feces and urine that accumulates in the cloaca is voided externally to the outside through the vent opening, found on the under surface of the tail.

How do I select a red-eared slider?

Most owners buy turtles from local pet stores or breeders. Young, captive-raised animals make the best pets, as they tend to be healthier and bond more readily with their owners. Older, imported animals may harbor internal parasites and often suffer from the stress of captivity.

"The shell should be hard; a soft shell is a sign of disease."

Start out right with a healthy pet. Avoid purchasing or adopting turtles that have sunken or closed eyes, have any type of discharge coming from the nostrils or eyes, or appear inactive or lethargic. Eyes that are sunken into the head or swollen shut often indicate dehydration, emaciation, starvation, and/or vitamin A deficiency. A healthy turtle is usually active and alert, feels "heavy," and retracts its head and limbs into its shell when handled. Make sure the shell is smooth and is not cracked, pitted, missing scutes, or has any obvious signs of infection (such as shell discoloration or moldy growth). The shell should be hard; a soft shell is a sign of disease. The vent should be clean and free of accumulated stool. If you can gently open the mouth (difficult or impossible to do in most turtles), there should be a small amount of clear saliva present, and the lining of the mouth should be pink. Mucus that is stringy, bloody, or cottage cheese-like may be a sign of a mouth infection, as is redness or pinpoint hemorrhages on the mucous membranes lining the inside of the mouth. Finally, when purchasing a turtle, always inquire about the guarantee in case the turtle ends up being unhealthy.

My red-eared slider looks healthy. Why does he need to see the veterinarian?

Within 48 hours of your purchase or adoption of a new turtle, your new pet should be examined by a veterinarian familiar with reptiles. The veterinarian should perform a thorough physical examination, including measuring the animal's weight, and should examine the animal for signs of dehydration and malnutrition. A fecal test should be run to check for gastrointestinal parasites. Some veterinarians routinely deworm all new pet turtles for parasites. The veterinarian should also examine the turtle’s mouth for signs of infectious stomatitis (“mouth rot”) and feel its abdomen (for organ swelling or abnormal masses) by palpating just in front of the turtle’s hind legs, beneath its shell. Your veterinarian may recommend blood tests, cultures, or radiographs (X-rays) to check for other diseases. Typically, no vaccines are required for turtles.

"Within 48 hours of your purchase or adoption of a new turtle, your new pet should be examined by a veterinarian familiar with reptiles."

Like all pets, aquatic turtles should be examined at least annually and should have their feces tested for parasites at every examination. In captivity, the toenails of red-eared sliders may need to be clipped periodically; your veterinarian can do this for you or show you how to during one of your routine visits.

Remember, thoroughly wash your hands after feeding, cleaning, or handling any turtle to minimize risk of contracting a Salmonella infection.

© Copyright 2020 LifeLearn Inc. Used and/or modified with permission under license.